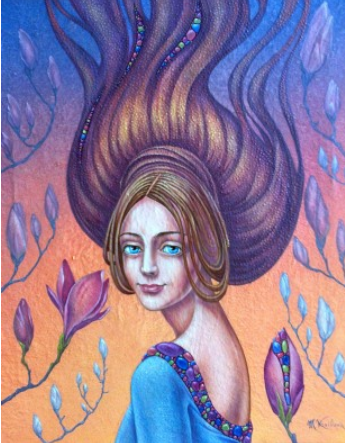 Margarita Vasilieva was born on December 5, 1967 in the city of Krasnodar, Russia.  In 1985, she completed her secondary general schooling in the city of Zaporoshye.  She also fulfilled her full three-year practical curriculum degree in accordance with the school of artists and decorators at the Zaporoshye Branch of the Union of Artists of Ukraine. Her M.V. was completed in 1992.  In 1996, she graduated from the International Institute of State and Municipal Management.  She earned her full degree in social work and an M.V. in psychology.  Her qualifications include working in the Gallery “Artex” in Zaporoshye as a decorator and featured artist.  Her pieces were also shown in the city of Tallin (Estonia) alongside the famed artist Don Valery Greg de Kalaveras.  She emigrated to the United States in 2001 and has since featured her work at venues such as the Art-Expo in 2004 at the Jacob Javits Convention Center and also in the Alexander Gallery in New York city in the Judaika style. She currently focuses her work solely on surrealism.